As Oggy climbs up on the roof to repair his TV antennae, he is struck by lightning. Oggy pounds on the door to get in, then stops, stunned. His fist has gone right through the door without even touching it... He can now walk through walls!

Walls Have Ears is the 42nd episode of Season 2, and was remade as the fifty-eighth episode for Season 6 under the title Thunder Oggy.

Episode starts: While on a dark and stormy night while Oggy and Jack are watching TV then a lightning bolt hit the TV antenna that causes the TV to turn off. Then Oggy kneeled in the floor then Oggy and Jack looked at the antenna. So Jack had an idea to fix it he pulls out an umbrella then give it to Oggy but Oggy doesn't want to but Jack beat up Oggy then he just take the umbrella then Oggy goes out the window and he tried to walks near the antenna but it was very windy then a lighting bolt just hit Oggy and falls down and hit the mud then there are snails in the mud and the snails climbed up to Oggy then he walk up in the stairs then a lighting bolt just got down then Oggy walk near to the door and tried to open it but it is locked. So Oggy tried to ring the door bell but Jack was listing to a loud music. Oggy ring the door bell rapidly but the the is still locked then Oggy screamed.So he tried to bang the door then notices it goes through the door.

And Oggy goes right trough the wall so Oggy got shocked and walk trough another wall and another one then Oggy sat down next to Jack then Oggy showed Jack that he can go through walls but Jack got scared after that one he crawled down the floor then goes to the radio then turn the volume up then remove the head phones but Jack got scared then put himself in the chair but turns it into a box shape the next scene Jack is wearing a nice pack then the screen shifts to Oggy using a roller skates to glide in the air then after reaching Jack. He let go of the roller skates then Oggy sofhecate through Jack Jack got scared then runs then Oggy kisses Jack then Oggy blows Jacks organs making Jack look ugly or funny by inflating his eye, feet, teeth and hands then Oggy smiled in the mirror making Jack scared then runs through the wall then scratches the wall then Jack became normal again and Oggy goes out Jack then Oggy shows Jack again walking through the wall.

Making Jack got dizzy a bit. Oggy goes right trough a picture then said Jack to kiss her but he nuds no then next a moose picking up a it's nose then a lampshade then a fishbowl then his own eyes. Then Jack goes to the bathroom then locks but Oggy tells Jack that he missed one nail then hits the nail then Jack walk near the toilet checks if Oggy is there or NOT so he sits down the toilet right then Oggy gave Jack a toilet paper then he got scared being flushed down the toilet then Oggy laugh but he saw the cockroaches and tries to kill them but Marky escaped the fight Oggy tried to step on DeeDee but it goes right trough it so Oggy tried to kill Joey instead but goes trough instead then Joey and Dee Dee made funny faces then runs away so Oggy took the shortcut by walking in the wall while Marky, Dee Dee and Joey are hiding behind the chair but Oggy knows that they are hiding there but goes trough with the roaches then Joey founded a thorn so to escape then he puts the thorns in the chair then Oggy got the air inside his body also they escape Oggy body while in the air he landed in the mud with the snails Oggy walks through the wall to go back inside while at the bathroom Oggy founded Jack with temperatures while Jack spots Oggy all the temperature got high then it explode (Jack also explodes). Oggy walks to the kitchen and tries to ambush the cockroaches inside. However Dee Dee emerges from his cup of yogurt and ends up inside Oggy's nose. He tries touching his nose hairs, which causes him to sneeze himself out of the house and into the mud puddle again. He goes back inside after having spat a snail from his mouth.

Inside, Jack is sitting with an ECG. When Oggy sees him again, he contracts tachycardia and causes the ECG to explode. Oggy then goes to watch TV. He tries to touch the remote but his finger seems to go through the buttons, and, fair enough, the remote goes through his hands too. He goes to the kitchen for food but whatever he eats goes right through him as well. He walks through the wall and sees Jack with a wheelchair. This causes Jack to crash his wheelchair out of the house and into the same puddle of mud. When the snails approach him, they get scared and flee.

While Oggy is listening to some music the cockroaches put a cement on him then Joey uses a nail and hammer to destroy the cement but Oggy can go through the cement seeing pulling out his weapon but the cockroaches are running but Oggy uses the wall while on the walk he saws an electric wires then Oggy got shocked then Jack is seen in the scene then laughs then walks away then the roaches came there in time watching him being stuck in the wall then they seen there laughing then they start pulling their tongues out then runs away but Oggy was crying after the night it was morning at outside seen that Jack Is giving him a baby food for his revenge by scaring him but the cement fall down again the snails are going on top of Oggy. Episode ends. 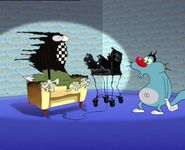 In original version, music is playing on a radio.
Add a photo to this gallery

In revised version music is playing on an MP3.
Add a photo to this gallery

Start a Discussion Discussions about Walls Have Ears