Charles Vaucelle
Upside Down is the 67th episode of Season 2, and was remade as the seventeenth episode for Season 6 under the title Ups and Downs. A Storm outside is messing things. Oggy's house is facing severe consequences by the storm, such as things going here and there, and what is left to happen is the whole house getting Upside Down and landing on a tree, so what will Oggy do with this storm and "Tree-House" thing?

The episode starts off with horrendous winds. A fly is trying to make its way, but because it lazily stops where it wants to stop, the strong vigor of the wind gets the fly to flatten on Oggy's door.

Oggy has laundry and steps out of the house. Due to intense wind currents, Oggy has trouble walking. Fortunately, the clothesline is close and Oggy tries to hang the clothes. Oggy hangs his first clothing on the clothesline. He does not look in the basket, so the other clothes are blown away just as Oggy starts to hang his first clothing. Oggy is surprised when he looks in the basket. He looks inside to make him think there was something that made the other clothes bafflingly dematerialize or turn into infinitesimal size. Bob tells Oggy that the others have flown to him, mostly the face, and thinks Oggy purposely threw them into him. Oggy peeks onto Bob and Bob does the same thing and beats up Oggy. Oggy nearly falls unconscious with the basket on his head and quickly runs to his house.

The house starts to slant 45° in the inside, and when the scene moves to the outside, the house is completely slanted. Oggy does his best to run to the other side as he ashamedly smiles at the camera. He used a plunger, crampons and a pickaxe to get to the other side, though the house is ample in width. At the near end, a fishbowl falls to the opposite side. Oggy tries to save the fish, so he releases the plunger and probably the pickaxe. He still stands perfectly due to him wearing crampons. Oggy safely catches the fishbowl and the fish as he virtually falls down. He kisses it, but hopelessly, the furniture falls into Oggy. He does his best to push away the furniture. He looks to the far end and notices that there are 10 pieces of furniture that have slid into him. Joey calls on Oggy and proceeds to unlink the buckles on the crampons. He is using his hind claws to keep a grip on the crampons, but due to the hefty weight, Oggy then slides to the other side. Oggy had saved the fish, and kisses it again. The house then goes back to 0° and the fishbowl unluckily covers Oggy's face.

Oggy nails everything in his house. The cockroaches had made Oggy to "stick" on the floor by putting a small wood plank on his hind legs and nailing it tightly. The cockroaches laugh as Oggy slightly shakes in fear. The house was blown away and it lands on a tree, leaving the house to move left and right. His coins fell out on his pockets, his clothing has been slightly removed and hides it with shame. The house did not completely land in a straight line, it has been slanted a little bit (probably 10°). Oggy had seen the windy day and his house in extreme trouble, being upside down. He just steps sideways in case he thinks that the furnitures will have the nail removed because he thought they were not tightly and securely nailed. He reaches the moose and slaps its eye almost vigorously. He then proceeds to reach to the door and steps out. Not knowing about the horrendous winds, his arm stretches almost ample in width. He hurriedly reaches back and steps in again. He opens the door, and rapidly shoots in, hitting the entrance of the cockroaches' vent.

They made fun of Oggy. Afterwards, Oggy was nearly mad, and shoots out the cockroaches. Oggy moves to the kitchen and his stomach grumbles. He uses a device to elevate him upwards and he reaches near the fridge. He reaches the fridge and opens it, but not knowing again that it was filled with a lot of food, they fell. Due to Oggy that he had not nailed it securely, the fridge fell. As it fell, the fridge slanted towards the device and so it's stuck between the gaps of the ???. Facing down not noticing he wants to go down, but due of being stuck, the device no longer works, leaving Oggy in trouble at the top of the floor on what is now a ceiling to the extent of the house upside down.

Oggy wants to take a bath. Since the bathtub is at the top being the floor, he uses plungers to get to the tub. Turning on the valve still works, the only problem is that it is not going to him, but to the ceiling that is in the bottom. He then makes his lowest point of him touch the running water, but because of the weight and the gravity, his weight makes the tub to detach and out to where he entered causing the water to unremittingly run water. Episode ends. 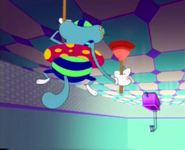