While his parents are hibernating, a little bear cub leaves the family den. His curiosity leads him to Oggy's house where the latter is getting ready for a costume party. Jack is dressed up as a bear and Oggy as a baby whose teddy bear looks too real.

Warning! Boa on the Run!

Un-bear-able Bears is the 33rd episode of Season 2, and was remade as the fourty-fourth episode for Season 6 under the title Sweet Teddy-Bear, A bear cub wanders into Oggy's house as the cats are getting ready for a costume party.

Episode starts: It all began in the early morning in Oggy's house, and he woke up as he changed the day to today. It's Carnival time! The Leap Year. Oggy, excited, decides to go get ready for the carnival in the house. Jack follows in, and he approves it all. Later, Oggy, dresses up as a baby, with his teddy bear, while Jack, has no disguise, with Oggy shocked and hanging in the ceiling, dresses in a bear suit. Oggy then appreciates it, and goes to the kitchen to prep up some cake. Joey, nearby, watches Jack hang the decorations as he hatches a plan to sabotage the home carnival. He, and his cockroach friends move around in Oggy's copy suit, and goes to Jack. He starts by folding up the ladder which made Jack's bear fall on his face. Jack tries to talk it in, but the cockroaches mess it all up, by instruments: A Hi-Hat, and a Bass Drum, from a drum set, then a saxophone, and a pair of cymbals. They scurried away, as Oggy comes back with cake. Jack sees the Oggy from before, as if it wasn't a puppet, and he runs away. Oggy looks shocked at his behavior.

The mommy bear, seeing that her cub is missing, goes out of the den to go look for it. the cockroaches, in plan, wanted to mess up the cats' bears by placing the real bears in it. (I wonder what were they saying before they nodded no...) Then, a compilation appeared:

Oggy was then going to prepare more for the costume party, when Cockroach Oggy stole his teddy bear, that leads to the mommy bear thinking that it was her cub, then bangs it on the head with a frying pan. As they run away with the bear, Oggy comes back with more cake, and saw the same bear, which he thinks it was Jack. But the mommy bear splatted his cake out with Oggy, as Jack Bear comes along to see what's the matter. Oggy then comes back, with his cake all over his face, decides to put in a dynamite inside of the suit, for revenge for messing the cake. As the cockroaches run away with the teddy bear, the mommy bear goes after it. Then they left the teddy bear with Jack Bear, which the mommy bear thinks she's the daddy bear. She falls head-to-toe with Jack Bear.

Meanwhile, Oggy made the last cake, which he left it on the table, which was then eaten by the cub, sitting in the table. Oggy, shocked at his cake, sees the bear, and calms himself down. When he realizes it's not his teddy bear, he takes the cub out to his mommy. Jack then warns Oggy as the mommy bear has the teddy bear. So when he replaces the teddy bear with the cub, the cub says hi to his mom, and the mommy bear beats Oggy out. He left torn, ripped, and skinned. The mommy bear and cub reunite, as Jack Bear was taken away. Oggy, and Cockroach Oggy waved goodbye, and they both start a chase. Back in the mountains, the mommy bear continued kissing Jack Bear for the rest of the night, as this episode ends as "un-bear-able". 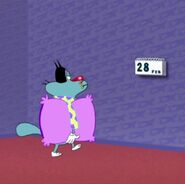 In the remake, this scene is removed was followed another scene. 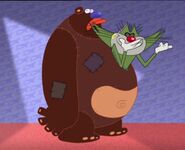