The Bait Bites Back

Oggy and the Kittens

The Lottery Ticket is the 34th episode of Season 1, and was remade as the twelfth episode for Season 6 under the title The Winning Ticket. Oggy and Jack win the lottery ticket number for a massive sum of money, that is, until Dee Dee gets a hold of it.

Jack and Oggy were very hungry, when Oggy open the fridge they have nothing to eat then he found a biscuit. Oggy cut a small piece of biscuit but Jack eat the large piece of biscuit and Oggy's small piece. When Oggy open and shake his Cow-y bank, they see a 1 cent coin to buy a lottery ticket. Their number is 10 and the TV is ten so they win. They are surprised that they win then they dream that Jack win in a spinning game then the mouth of it spit many 1 cent coins while Jack ride his new car and catching it with his bag/wallet and Oggy found 2 biscuits. Then Dee Dee grabs it, takes a look and gives it to Marky and Joey, but Jack got it back and Oggy warn him to not take their lottery ticket. Then they have a nice orange juice to celebrate that they win, but Dee Dee stole it again and give it back while the other roaches clapping but they warn Dee Dee that Jack is coming to give it back but this time when Dee Dee run to his roaches but he didn't get to the roaches so he run until Jack get smashed to a door then Oggy stop him and catch him while Jack smash with his big hammer but accidentally hit Oggy. Jack is bungee jumping to give it back but Oggy's elevator smash him then Dee Dee stole it again. Then Dee Dee hide under the rug but he stop by Oggy's foot then Jack open the rug but Oggy get smashed by him and take a look but it wasn't Dee Dee and their lottery ticket it was a dynamite that Dee Dee left. Then Jack and Oggy's butt got black by explosion, when Jack see their lottery ticket but it wasn't, it was a 3 funniest picture of Jack that he wears an underwear while he don't have fur. Then Dee Dee finally got back to the roaches but Dee Dee can't be given yet they play a bull play that Dee Dee is the matador, Jack is a bull and Oggy was the bull rider. after the 2nd ride Dee Dee is ready to cut their lottery ticket. Then Jack stop while Oggy flies in a kicking position and accidentally kicked through Bob's mouth, beating him up. Then Dee Dee said that Jack will get down his head and Dee Dee, Marky and Joey will celebrate that they win now. Then Dee Dee turn on the radio that Jack will do a funny dance when Dee Dee say so. Jack didn't want to dance and Dee Dee will not give it back now. Then Jack change his mind, then the roaches give a hula costume. Then Dee Dee change the music. Jack will dance a boring hula dance with banana skirt. Then the roaches laugh and take pictures to him. Then Oggy sees Jack's dance while the roaches finish to their bathroom. Then they give back that they win but they thought it was money but it was an exercise machine. Dee Dee runs away because Joey and Marky were gonna punch him. 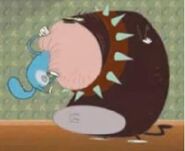