Jack is glued to a soccer game on TV. Drawn by the screaming soccer fans, Joey takes an interest in the game and with his two partners and a few buddies he forms two teams and organizes a match. But they need a soccer field...

Penalty Shot is the 48th episode of Season 2, and was remade as the forty-ninth episode for Season 6 under the title Soccer Fever.

Episode starts: Jack is watching a football match on TV, equipped with cans of cola and an airhorn. Oggy wants to insert the plug from the vacuum to the outlet, but Jack doesn't want his cousin to change the plugs, but Oggy did so. The former then charges his anger and beats Oggy.

The Cockroaches are in the air vent and Joey decides to watch the football match. When the team Joey was supporting won a penalty, hence the title of the episode, Jack gets upset, so he decides to put him into an airhorn and a saliva-coated Joey gets shot back to the air vent.

Dee Dee and Marky saw a splatted Joey, who has been coated in saliva earlier, before hitting him with their flyswatters.

Now back to his normal shape, Joey tells Dee Dee and Marky not to beat him again. Joey then shows his brothers two pairs of football shorts to wear during the match, but Dee Dee and Marky thinks they're boxer shorts, angering Joey.

The roaches are now wearing shorts and Joey picks up a Telstar ball and plays with it, showing off some skills. As he does those, Dee Dee holds the ball tightly with his foot, knocking Joey down.

Once Joey tells his brothers to practice on a different terrain, the cockroaches found another field: grass!

They kick the ball around until it hits them through the lawn. Joey then ask his brothers to mow the grass, so they ride on Oggy's lawnmower, slicing the grass down, even destroying the flowers while Oggy is gardening, causing him to stand on the handle of the lawnmower, wanting to catch them. Joey pushes the lever and ride the opposite way. They rode around the grass before crashing into Bob's house and shaving his fur off as Oggy gave him a red card. Bob then gives him a punishment.

Joey shows Dee Dee and Marky more tricks when a naked Oggy passes by with his lawnmower and Bob traps them in cement.

Back to the air vent, while the cockroaches are trying to free each other, Joey thinks about having a football pitch. They decided to use Jack as a pitch and Joey hits him with a mallet, then he calls several insects, leading them to Jack, who has be turned into a football pitch. Joey then starts the match whilst Oggy hears him blowing a whistle, then he saw the roaches playing football on Jack. Rather than saving his cousin from the insects, Oggy decides to watch them playing football as Jack cries for help. The episode closes with Oggy drinking some soda, blowing his airhorn and smiles. Episode ends. 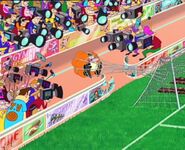 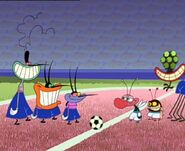