Oggy and the Cockroaches (known as Oggy et les Cafards in French originally) is a French animated comedy series produced by Xilam and created in 1997 or 1998. It was originally made in France but also gained international popularity as well and now runs on different channels in different countries.

The show centers on Oggy, a content and lazy, albeit very tender fat blue cat, who would usually spend his days watching TV or doing something - if it wasn't for the three roaches in the household: Joey, Dee Dee and Marky (named after members of the punk group, the Ramones). The trio seems to enjoy generally making Oggy's life miserable, which involves mischief ranging from (in most cases) plundering his fridge to such awkward things like hijacking the train Oggy just boarded. Oggy usually finds creatures accompanying him to the end of the episode, such as crabs, clams, a horse, a very technologically advanced child, a puppy, and an octopus. However, it's not always Oggy who wins.

The cartoon itself relies on slapstick humour, much like its ancestor, Tom and Jerry, only amplifying the level of extremities up a notch; while traditional slapstick cartoon characters prefer dropping anvils and pianos on each other, this show sometimes even uses buses or submarines. Despite these, most gags are easily accessible and enjoyable for younger viewers. Since dialogue is kept to a minimum, the humour is entirely visual.

Depending on the channel or streaming service, a series typically contains 3 episodes (4 episodes in the case of airings on Netflix until September 2017) or parts, aired in order at the discretion of said channel or service.

The show was initially produced by Gaumont Film Company then later Xilam. The voices were all provided by either Hugues le Bars (as implied in the credits) or Marc du Pontavice, but no spoken voice is heard, but the speaking voice was used only in the United States. However, in the French version, certain voices like laughter could be used on one of the cats and later on one of the cockroaches, sped up. In Germany, witty poems relating to the screen action were dubbed over the original sound, written by German dialog editor legend Eberhard Storeck and spoken by actor Dirk Bach.

Oggy and the Cockroaches is currently broadcast in over 190 countries and territories worldwide.[1] Asterisks denote provincial/state/public-service broadcasters.

In India, Oggy and the Cockroaches used to air under its English name on Nickelodeon India since 2009 with voice-actors voicing the characters in parodies of famous Indian film stars in Hindi. The cockroaches' names were changed for the show: Joey was named Chhotu, Dee Dee was named Motu and Marky was named Lambu which were used in the Pakdam Pakdai show in Nick Sonic India. The original language for all the Indian Oggy and the Cockroaches channels is in Hindi.

The entire series was re-dubbed with different voices for Cartoon Network. As of 16 July 2012, this newly dubbed version of the show has begun airing on Cartoon Network India. The change of channel has also resulted in the change of voice actors for the programme. There is also a narrator who speaks rhyming words while narrating. The names of the cockroaches were also changed again on Cartoon Network India: Dee Dee's name is heard as "Paplu", Joey's name is heard as "Jhaplu" and Marky's name is heard as "Taplu". The first three seasons of the series started airing on Nick from 1 January 2015, with a whole new voice cast, no longer parodies of Bollywood actors. The voices of all the male characters were voiced by Sanjay Keni who also voiced the male characters in the Movie. The names of the cockroaches also now remain unchanged. Now, the Oggy and the cockroaches is released in Tamil, Kannada, Malayalam, Telegu, Gujarati, Bengali, Marathi on the Nicklodeon Sonic. The cockroaches use Marathi language and talk like a fish monger at times.

As of 2019, Cartoon network is the original network in India as Nickelodeon Sonic and Nickelodeon India works rarely. As of 2020, Cartoon network produces the Season 3 revised, Season 5, Season 6 and Season 7 episodes in special albums which airs normally at 3:30pm but after the first week of January 2021, the production of new albums are stopped. Presently, episodes in Cartoon Network are shot according to the dialogues used when they appeared on some albums. Also, Nickelodeon Sonic made the new name of Oggy and the cockroaches as Hamara Wala Oggy only in their channel. In this, Season 4 is shot with English names of the characters.

Note: An Indian cartoon named Pakdam Pakdai is adopted from the Oggy and the Cockroaches.

In the Middle East, Oggy and the Cockroaches used to make an Arabic Opening with vocals.

Seven DVDs came out in 2003 within the United States, with 12 episodes each.

A French DVD boxset is available of the complete first series, 78 episodes in all plus the pilot and an episode from Season 2. 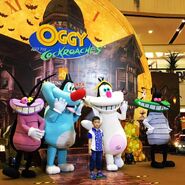 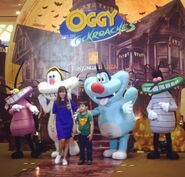 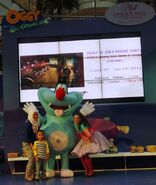 Oggy Oggy is an upcoming spinoff of Oggy and the Cockroaches, to be released in 2021 as a Netflix original. Oggy Oggy caters more to a preschool audience rather than the pre-teen audience of the original show. It focuses on Oggy's early life as a curious, sensitive, but compassionate kitten and tries to be helpful to everyone he meets. Unlike the main series, the cockroaches do not appear in this series as it takes place in an alternate fantasy world filled with cats.

Oggy and the Cockroaches - Next Gen

The New Adventures of Oggy is an upcoming reboot of Oggy and the Cockroaches, which is to be released in the Fall of 2021 as a Netflix Original. This show features new graphics that is in line with Xilam's recent offerings and leans more towards the aspects of friendship, though it remains true to the original show. It focuses on Oggy taking care of a kindhearted seven year old elephant named Piya, the daughter of Oggy's Indian friends. However, the cockroaches take advantage of the situation in an effort to ruin Oggy's life.

The key player in this imbroglio is Oggy, a fat, debonair cat who only gets off on being lazy and keeping his house in impeccable order. And yet he is not alone. Three roaches wish to take over this beautiful house. And it's much too clean for their tastes. These nasty vermin make his life absolute hell. First there's Joey "the belligerent", then Marky "the phlegmatic" and finally Dee Dee "the glutton". And they spend their days and nights coming up with the most Machiavellian plans against our poor, blue cat. Oggy isn't alone in this living nightmare. His cousin Jack, who is always desperately trying to help him, generally just makes the situations much worse by provoking most of the chases, the turmoil and the accidents of every size and shape. And Oggy doesn't come out unscathed.

Joey, Dee Dee, and Marky may be annoying but Oggy’s life would be a lot boring without them.

He's blue, he's a good guy and he's a wimp. Here is Oggy, the only cat the word "feline" can't apply to. He would be the happiest of cats if three cockroaches hadn't decided to settle inside his comfortable home: Joey, Deedee, and Marky. They are ugly, stupid and of course, they're the bad guys. They were made to meet Oggy and so here we go! It's fast, it's crazy and it is hilarious... it's Oggy and the Cockroaches.

Oggy is a big sleek cat who takes two things seriously: relaxing, and keeping things running smoothly at home. He likes watching TV, repetitively listening to his polka records and munching crisps whilst in the bath. Oggy would love to lead an easy and peaceful life but is constantly being tormented by three hideous cockroaches. These hardened insects will do their utmost to make Oggy's life a misery. The cockroaches are not his only problem, Oggy's quiet life is also disrupted by Cousin Jack, bent on wiping out the cockroaches once and for all.

Oggy just wants to live a nice quiet life but that’s not going to happen with the roaches trying to make his life a misery! Plus his cousin Jack who is determined to exterminate them once and for all!

Wimpy blue cat Oggy would like nothing more than to snooze, but he's constantly bothered by the three ugly cockroaches who have invaded his home.

Lazy cat Oggy enjoys living a simple life -- eating and watching TV are among his favorite hobbies. Unfortunately, his roommates often get in the way of his laziness. Those roommates are tiny cockroaches Joey, Marky and Dee Dee, who like to cause mayhem like raiding Oggy's fridge, making big messes and forcing the cat to clean up after them. Despite the trouble they cause, Oggy secretly misses the little critters when they're not around. Also part of Oggy's life is nature-loving neighbor Olivia, who is his love interest.

Oggy and the Cockroaches is the explosive confrontation of a cat with three pests—but this time, the victim is the cat himself and his tormentors are the roaches! Oggy would be the happiest of cats if three cockroaches hadn’t settled inside his comfortable house. Oggy fights to defend his home turf from the unwelcome pests, namely Joey, Deedee and Marky, and he always comes out on top.. well, almost always!

What is blue, what is good, what is soft? It's Oggy, the cat! He shares his life - to his greatest misfortune - with three filthy cockroaches who annoy Oggy to HELL! This time, its through the ages! Good luck Oggy...

Who is kind, soft, clean, and blue? Oggy! It will not hurt anything and it is peaceful. But his life? It's the complete opposite of serenity due to three disgusting, dirty, crazy, creative, and sometimes cute cockroaches. Also, in the life of Oggy is Olivia. It's not disgusting, nor is a cockroach ... it's a cat! Also, it's Oggy's love affair! Good luck Oggy, for surviving the bad cockroaches!

Oggy is tormented by the evil cockroaches Marky, Joey and Dee Dee, who have pleasantly settled into a beautiful private house with all amenities. Unfortunately, they feel at home there, although other occupants of the house do not tolerate them at all and would be happy if the cockroaches moved out. There is also nothing surprising in this, considering that cockroaches mainly spend their time bullying the family cat Oggy. In the fight with cockroaches, Oggy does crazy things that often fall out quite funny.

He's blue, he's good, he's soft. It's Oggy, the only cat that the word "feline" doesn't describe well. He would be the most cuddly of the tomcats if, in his large, charming house, three filthy cockroaches hadn't settled down : Joey, Deedee, Marky. They are ugly, they are stupid and of course, mean and they still have no intention of running away. With Oggy, they were made to meet, it's done!

References to Oggy and the Cockroaches

Most references to Oggy and the Cockroaches occur in other franchises produced by Xilam Animation.

v · d · e
Oggy and the Cockroaches series
Retrieved from "https://oggyandthecockroaches.fandom.com/wiki/Oggy_and_the_Cockroaches?oldid=75817"
Community content is available under CC-BY-SA unless otherwise noted.