Love & Kisses
Monica, Oggy's twin sister and Jack's love interest, is a tritagonist character in the series. In Don't Rock the Cradle! and Oggy the Babysitter, she seems to have a child (meaning that Oggy is the uncle to it). She visits Oggy's house every now and then. In Sitcom and The Laugh Box, she and Jack argue with each other. She is well known for being very active and likes to take on physical challenges such as sky diving and bungee jumping. She's always seen skating around on her inline skates. Out of all the main characters, she has the least amount of appearances; even fewer than Bob.

Monica lives in Alabama and has come to visit Oggy. She always refers to her home as "Sweet Home Alabama". The country roads take her home to the place she belongs.

She is tomboyish. She had the skates since she was born. She likes playing with Jack and is stronger than him. In the episode Sitcom and The Laugh Box, she was angry with Jack and destroy some things in Oggy's house. She also never cries unlike Olivia or Oggy. In Season 3, she wears a pink skirt and pink Mary Janes.

Monica looks like Oggy since they are twins. She has blue fur, albeit lighter than Oggy's, a red nose, blonde hair, pink eyes, light pink tummy, white gloves, and pink roller skates with green lines on them. She also has an oblong shaped tail. Her daughter, a pink kitten, resembles her mother but looks more like Jack.

Monica and Jack arguing in Sitcom.

Monica In Season 4 Oggy Is Getting Married!

Soldier for a Day cameo 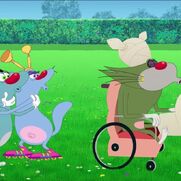 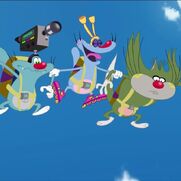 Add a photo to this gallery
v · d · e
Characters in Oggy and the Cockroaches
Retrieved from "https://oggyandthecockroaches.fandom.com/wiki/Monica?oldid=68184"
Community content is available under CC-BY-SA unless otherwise noted.