While Oggy is getting his butt whipped by Jack in a game of Ping-Pong, his sister shows up unannounced. Spellbound with love, his heart racing, Jacks gladly lets his cousin win and takes off after the beautiful cat...

Original: Go For It, Jack!
Remake: The Power of Love

Go For It, Jack! is the 28th episode of Season 2, and was remade as the twenty-first episode for Season 7 under the title The Power of Love.

The episode starts with Oggy and Jack playing table tennis. When Oggy gets prepared to hit. Jack did his first serving and won. Just then Monica came and Jack thought to flirt her. He tried to handshake with her, But she kissed his nose They started to laugh. When Jack got inside he sawn Monica rollerskating, He though of joining her. He started looking for his skaters he sawn the Cockroaches sleeping on them. He kicked them out and joined Monica. When he saw Monica Skating he was doing okay until Joey put a chewgum on his skater causing him to jump and fell in the stair's handle which hit his nuttock and starting burning it soon he hit the stair ball, While Monica was watching he pretened he is okay. Soon Oggy came and asked Jack to play more table tennis but he denied then he went to the washroom. Soon the next day Jack woke up from sleep and saw Monica doing Martial Arts. He thought of joining her too. Just then Marky who looks like if he is drunk or laid just came out soon Jack caught him and tied him as a belt he tried to impress her soon Monica saw this and told Jack to come near her he camed then he was expecting a kiss from her but it was the complete Opposite she kicked him in his face and started hitting him on the floor. Oggy again came and asked Monica to play Table Tennis with him but she denied she told to ask Jack who also denied. Later the evening, Jack and Monica are riding bicycles in a park, However Jack gets tired of cycling he stops and tried to touch Monica's bicycle but she went and Jack fells of his bike so he cheated by sneakliy bought his car, He then started driving the car but Joey was keep pressing the horn button and soon Marky and Dee Dee shown up they had broked of the accelerate pedal and threw it to Jack. Then he tresspased a bridge and started flying on the sky He sawn Monica who is stil cycling he waved at her but she was confused. Then Jack unexcpectedily drove himself into a car racing tournament. He started hitting every car which is basically his car but in different colour. He won the race and the first prize. It was a right time when Monica was also there seeing it, She and Cockroaches clapped. Jack smiled but his tooth are broked. Then it shown that Jack is getting bandaged by Monica and he also got his Trophy, She kissed him for making her proud but Oggy feels a bit weird. Jack who mocked him by teasing him with his toungue. He hugged Monica and Monica hugged Oggy too. Jack soon ranged a bell and Monica goes off with Jack who is in a wheelchair. Oggy who looked very weird took the table tennis' table inside his house through the garage and the episode ends there. 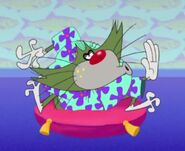 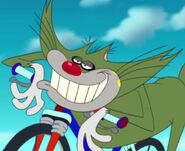 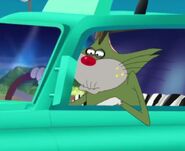