After a rather disastrous chase with the roaches, Oggy's nose is broken. He gets an operation in the hospital and the new nose is so pretty that all the babes go wild. The roaches are jealous and seek revenge...

A Fit Body for Oggy

Face Off is the 43rd episode of Season 2, and was remade as the fifty-seventh episode for Season 6 under the title Oggy's Brand New Face. Oggy needs to have plastic surgery after his face gets badly injured during a chase against the Cockroaches.

The episode starts with Marky and Dee Dee with a roll of toilet paper in their grasp, running from Oggy and Jack. Oggy gets close to Dee Dee and attempts to snatch the toilet paper roll from him, but the chubby cockroach tosses it to Marky and they escape into an empty room. As the two cats reach the room, they find nothing except the toilet paper, leaving them puzzled as to where the two pests have gone. Nonetheless, Oggy approaches the toilet paper and is about to retrieve it when suddenly, an anvil falls out of nowhere and crushes him. The camera then pans up to the laughing cockroaches on a ceiling lamp, having just dropped said anvil on the poor feline.

As Oggy is transported to the hospital in an ambulance, Jack decides to lift the blanket covering his injured cousin and is treated to the latter's hideously mangled face, almost causing him to barf. He takes a look at the heart rate monitor and is shocked to see that Oggy has seemingly flatlined... but it starts moving again. A Pac-Man-esque monster then appears on the left and devours the monitor's lines, shocking Jack further. Now Pong is being played on the monitor, and the green cat is now irritated at the monitor's peculiar behavior, which is being controlled by Joey. Meanwhile, Dee Dee and Marky are seen goofing off on top of the ambulance, grasping on its sirens. Marky goes inside his siren and flails his head wildly, while Dee Dee unscrews the light and wears it before getting thrown off the ambulance by the wind.

Jack finally arrives at the hospital and pushes the gurney holding his cousin to the operating theater as the nurses take a look at Oggy's mangled face and freak out. By the time he finally gets to the operating theater, he becomes so exhausted that he falls down and pushes the gurney towards the rotund surgeon, who also takes a look at the blue cat's disfigured face and shivers in fear. Jack then pulls out a picture of Oggy's face from his fur so that the surgeon will get it right, and the surgeon gets to work. However, Joey vandalizes the picture just as the surgeon is about to finish sharpening his knife, and he works on Oggy's face as Jack reacts in terror.

As Jack paces around the waiting room holding a bouquet of flowers behind his back, the surgeon finishes his work and reminds Jack that Oggy is finally ready to enjoy his new face. Jack and the nurses then witness the moment of truth as the surgeon removes the bandages covering Oggy's face... but it is less than what Jack has expected, who freaks out as the cockroaches emerge from the flowers and laugh. As it turns out, Oggy's face now looks like something drawn by a 5-year old, and when Jack explains why he got Oggy's face wrong, the surgeon pulls out the photo vandalized by Joey.

The terrified nurses panic and run from Oggy as he strolls around the hospital with his now crudely-drawn face as he surveys his surroundings, causing everyone in the hospital to also panic and vamoose. Oggy doesn't get why everyone is scared of him now, so the cockroaches come in and answer his question by holding up a mirror near him. This causes Oggy to also freak out at his own face as Joey slams the mirror on his head and runs off with the other roaches.

Back at the operating theater, Jack orders the surgeon to fix Oggy's face again, but as the surgeon puts the picture of Oggy on the cat's body, Marky erases a huge portion of the picture and hides as the surgeon comes back and commences his work. Again, he signals to Jack that the surgery is done and they all gather round to unveil Oggy's new face. The surgeon then takes off the bandages to reveal Oggy's now headless face, which shocks Jack so badly that he actually takes off his eyeballs like glasses, blows on them, rubs them with cloth and puts them back on his face. When Jack demands to know why Oggy now looks like that, the surgeon takes out the photo of Oggy which was erased by Marky.

Meanwhile, in the waiting room, Joey is taking a look at a magazine when he suddenly eyes a page with a handsome celebrity on it, tears it off and replaces Oggy's photo with it. When the surgeon returns and takes a look at the celebrity photo, he rolls with it and begins working on Oggy's face again, and when he is done, he does two OK gestures with both hands and slurps up a noodle of spaghetti.

Once again, the surgeon unveils Oggy's new face to Jack and the nurses, and this time, the nurses swoon over Oggy upon seeing his now gorgeous face, but Jack, as usual, doesn't find this to what he had expected. The surgeon then pulls out the picture Joey swapped as Oggy gets chased out of the room by the amorous nurses, then hides behind a wall as Joey arrives. As the nurses start to wonder where Oggy went, the insect gestures to them that he is behind that wall, causing them to chase him again, though he comes across the same man he put in the plant pot, throws him out and hides in the pot as the nurses run by. Seeing that the coast is clear, Oggy tries to escape, but Joey shatters the pot with a mallet, revealing Oggy's handsome face. Oggy then panics and runs from the nurses again, who finally catch up with him and give him several kisses all over his body.

As Oggy staggers around disorientedly, Joey puts up an industrial shredder and trips Oggy with his foot, causing him to fall into the shredder and get shredded. As Jack comes wondering where Oggy went, he sees him with his head now resembling noodles and takes him back to the operating theater.

Jack then pins up a huge picture of Oggy's face on the wall and orders the surgeon to copy it exactly. Outside in the waiting room, Jack looks at the cockroaches hanging from a rope on a ceiling, which he has bound and gagged to make sure they don't cause any more trouble. The surgeon then gathers himself and the others one last time to witness Oggy's face as he removes the bandages, revealing it perfect and good as new... but there is one thing missing. The surgeon, realizing he forgot something, pulls out Oggy's nose from his jacket and places it on the cat's face where it belongs, completing it and satisfying Jack. Walking towards the nurses, Oggy tries to kiss them, but they freak out and slap his nose off, causing it to fly in the surgeon's palm, where he retrieves it from him.

As Oggy and Jack exit the hospital, the cockroaches set up a grand piano dangling from a pulley as Joey severs the rope holding it, causing it to land on Jack and startling Oggy. Now the whole situation starts all over again as Oggy takes Jack into the operating theater, while some nurses freak out at the sight of Jack. When Oggy gets to the room, he shows the surgeon to Jack, whose face is now awfully disfigured. This gives the surgeon the opportunity to operate on Jack as he screams in pain.

Meanwhile, the nurses are hanging out in a hallway as Joey spies on them, sticks the celebrity photo to his face and approaches the nurses, leaving himself to get kissed by them as one of their hats drifts into view. 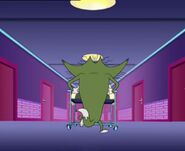 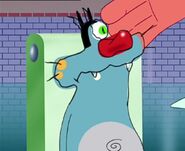 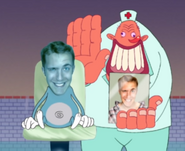 In original version Oggy's face was replaced to original.
Add a photo to this gallery

In revised version Oggy's face was replaced to new.
Add a photo to this gallery